Israel’s commitment to reducing its net carbon emissions to zero by 2050 is changing the way homes and other buildings are being constructed, accelerating a shift away from how structures have gone up until now.

In March 2022, green building standards meant to reduce emissions during and after construction became mandatory for all building projects in Israel.

In July, the Energy Ministry and the Israel Green Building Council announced that eight local authorities had been selected for training in green building techniques.

They also announced that new housing would have to provide potential buyers with an energy efficiency rating, such as is already done with most large appliances.

The moves are typical of the carrot-and-stick approach that countries and cities are using around the world to push for greater sustainability in many areas, including construction.

Cities are major contributors to carbon pollution. They are responsible for upwards of 70% of global emissions, according to the UN’s Intergovernmental Panel on Climate Change, and the majority of that comes through building and operating structures, experts say. Greening that process will need to be a major priority for Israeli policymakers if the country is serious about reaching its 2050 goals, according to experts.

“The greenest building is the one that already exists,” Carl Elefante, former president of the American Institute of Architects, famously said.

He might have added that the next best thing is a building that works through every aspect of the construction process to reduce its carbon footprint, from its project management and waste products to using designs and materials that minimize the energy it will use through its lifetime.

To qualify as a green building, a structure needs to be assessed from a variety of vantage points and meet certain standards. Both construction and occupancy phases need to be designed to manage energy, water, and other materials efficiently while making use of technologies that minimize emissions and harm to the environment. Much of the burden falls on developers, though occupants often have a role as well, especially in lowering energy inputs.

The process usually goes well beyond cosmetic features, such as so-called green walls – vertical sheets of plants on the outside of buildings, though they do have some impact.  Increasingly fashionable in big cities, green walls play a role in absorbing carbon dioxide and in helping to manage temperatures and improve air quality. But the level of impact remains under debate, while there is general agreement that less visible measures, such as increasing efficiency, make a more significant difference. 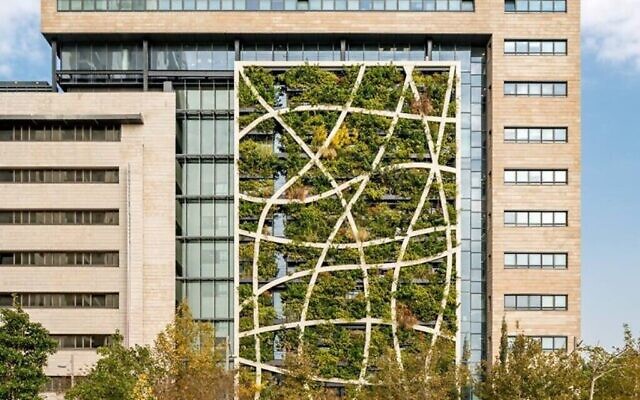 The plant-covered exterior of the Checkpoint building in Tel Aviv. (Yoav Peled/Vertical Field)

Nationwide, only 85 structures are LEED-certified by the US Green Building Council, considered the global standard for sustainable building. In Jerusalem, the country’s most populous city, only two have earned the rating (including the building housing The Times of Israel offices).

Israel’s Environmental Protection Ministry has certified another 450 buildings as meeting sustainability standards. According to the ministry, as of 2020, another 1,000 buildings were in the certification process.

Ziv Shor, who heads the Israeli branch of international commercial real estate giant JLL, says the country is in a transitional phase when it comes to green building. 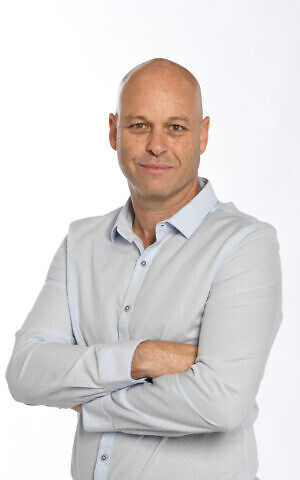 In the past “developers did not understand why they should change,” said Shor. “Energy efficiency and minimal carbon footprint are now becoming the number one priority for people and for occupiers [of commercial buildings], and so in turn it becomes the priority for developers.”

Shor believes that the real estate management sector can lead the way by making sure the construction industry delivers buildings that businesses want.

He is seeing commercial occupants happy to pay a premium — up to 10% above regular commercial rents — for sustainable building. A green building can in turn deliver savings of 20% to 40% in building operating costs through its lifetime, with those numbers expected to rise as resources grow scarcer and technologies more efficient.

In the 1950s, Israel led the world in solar power production, largely because it needed to generate energy independent of the Arab world. The country’s shift to tech has produced a fair number of startups aiming to bring green solutions to various sectors.

Among the young Israeli companies with the potential to make the biggest impact is ECOncrete, which focuses on creating sustainable concrete for undersea or shoreline applications that are designed to support marine environments rather than harm them.

The company says it has already taken on 40 projects in 11 countries, adapting its product to each location’s unique biological makeup in order to support local marine fauna and flora. 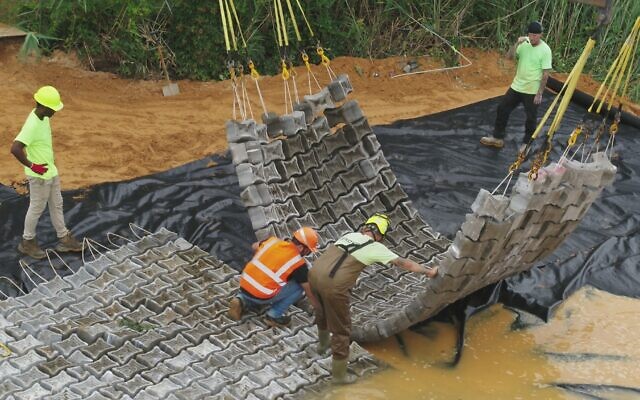 Concrete is the most polluting element of the construction process, accounting for some 8 percent of carbon emissions worldwide. Over 4 billion tons of cement, which is mixed with water and aggregates to create concrete, are produced each year.

But concrete — cheap, durable, and long-lasting — is also vastly important for the construction industry, providing housing for about 70 percent of the world’s population.

ECOncrete says its material can cut carbon output by up to 70% compared to traditional cement. The company’s admixture mostly replaces clinker — a gravelly substance that is a key ingredient in cement and the main source of emissions in concrete — with more sustainable and recycled materials such as slag cement or fly ash, though the manufacture of those materials is known to pollute as well.

On land, Criaterra claims to slash energy usage by 90% compared to traditional manufacturing by replacing kiln-fired cement and ceramics with what it says are 100% natural materials. The company is focusing on wall tiles for interiors, but also plans to branch out into masonry.

Ramat Gan-based Green Vibe says it reduces concrete waste in the construction process by up to 50%. Rather than re-inventing concrete, Green Vibe does this by allowing builders to maximize efficiency, using sensors, advanced data analysis and other tools across the lifetime of major projects.

Urecsys, based at the Hebrew University, says it can reduce exposure to hazardous urban air pollutants within buildings by utilizing its unique modeling of air pollution via machine learning algorithms.

Urecsys claims to reduce the penetration of hazardous urban air pollution into office buildings by a huge percentage by analyzing pollutants in the air and making data-driven predictions, which are then fed into a building’s central ventilation system to allow only clean air in. The system is also touted as a substantial energy-saver, reducing a building’s greenhouse gas emissions.

Pre-fabricated construction has been touted as more sustainable than traditional building due to efficiency savings and other environment-friendly benefits over a structure’s lifetime. While Israel lags in modular construction, the country’s largest developer, Tidhar, is experimenting with building bathroom pods entirely off-site and then lifting them into position within apartments.

The company has installed 180 so far but is aiming for 1,000 units across its Israeli projects by the end of this year and at least a doubling of factory capacity in 2023.

For homeowners or renters looking to reduce their carbon footprint on their own, HomeBiogas has developed a build-it-yourself system that turns kitchen waste and livestock manure into clean cooking gas for up to three meals a day, plus an extra 10 liters of clean natural liquid fertilizer. The high-tech composting firm, which is already listed on the Tel Aviv stock exchange, boasts that it has already mitigated 58,506 tons of CO₂ through the use of its technology.

The key to successful sustainability is demand — which is already happening in the office market, with international tenants in particular demanding high environmental standards for the buildings they occupy, according to Shor at JLL.

Developers know what they need to deliver for these kinds of tenants and are already changing they way they do things to accommodate them.

Hotel guests, on the other hand, are less likely to demand concrete efficiency standards and the like, but some hotels are also using environmentally friendly construction, allowing visitors to reduce their carbon footprint even if away from home. Etic hotels, which lists environmentally friendly properties for short-term stays, identifies 136 sustainable hotels in Israel. 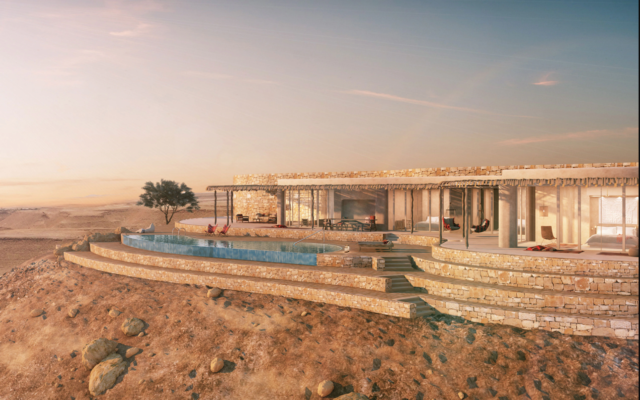 The view from a private villa at Six Senses Shaharut in the Negev Desert, on a hilltop overlooking the Arava Valley (Courtesy PR)

While the hotel is designed to blend aesthetically into the desert landscape, it also boasts a 25% reduction in energy consumption compared to a traditional hotel of a similar size. The hotel composts food waste to feed the organic garden which partially supplies the kitchen, bottles water on site to avoid plastic, donates used cooking oil to make biodiesel in the community, and uses a palm grove to absorb 100% of the treated wastewater on site.

While focusing on delivering a luxury holiday experience, it draws on the orchards, fields of herbs, livestock farm, dairy and organic farm that surround it to supply the hotel restaurants with fresh seasonal ingredients with minimal travel involved. The spa uses natural oils gathered from the Mitzpe Hayamim farm.

Despite the advances, Shor noted that the sustainable building space in Israel is “not yet a mature market.”